A few of years ago, the parents of Kelsey’s high school boy friend invited us to stay in their lakefront cabin in Alaska. We drove through Wasilla on the way. That’s where VP candidate Sarah Palin learned public administration as mayor (a part-time position). That place is tiny. It makes Hastings look huge!

In a moment of hyperbole, Karl Rove claimed that Wasilla is the second largest city in Alaska. This seems unlikely – Anchorage and Juneau, the state capital, should both be substantially larger. In fact, there are only a few thousand people in Wasilla. The popular statistic of 9,000 could even be an overstatement, since city estimates are in fact less.

Wasilla does, however, provide a bit of perspective on the “bridge to nowhere” argument in Congress a few years back. Wasilla is said to be about an hour from Anchorage, though it’s much closer ‘as the crow flies.’ The “Knick Arm” off of the Cook Inlet provides a water barrier between Anchorage and various destinations.The cabin we visited was perhaps 10 miles from Anchorage, but the short trip involved crossing the mile-wide Arm. And in fact, the land across from Anchorage is undeveloped wilderness with a scattering of tiny settlements. Nonetheless, there’s a Knick Arm Bridge Authority that’s been trying to find money to build a bridge. Recent estimates suggest the bridge will cost at least $1.5 billion.

Here’s a map of the area with the cabin: 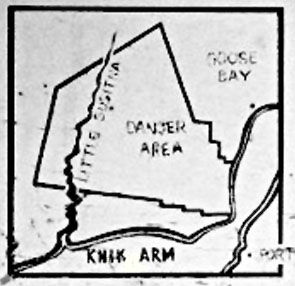 The Little Susitna River flows into the Knick Arm (bottom of map), and Anchorage is across the Arm (about where the “Port” appears in the lower right). The mighty metropolis of Wasilla is off the map to the upper right. This whole area is essentially wilderness. The Little Susitna is a good place to fish for Alaskan salmon, and in fact that’s where Biscuit caught her salmon:

Getting back to the VP…

An article in The Economist last week reported that as mayor of tiny Wasilla, Sarah Palin made annual, official visits to Washington, DC, in search of government funding. Our city is over twice as large, and I doubt our mayor has ever made an official visit to DC. I expect he’s made a few official visits to St. Paul, but he works there.

On some level, it’s nice to think that any citizen could serve as the American President in a pinch. But is that realistic? We had a Wrestler-In-Chief for governor here and I can’t say it was good for the state. If anything, it ushered in the period of budget cutting that has led to overcrowded classrooms and collapsing bridges.

There is no way to predict what the former Mayor of Wasilla would do in an international crisis. We haven’t even been able to see her run a major election campaign, since she’s a latecomer to this election.