Last fall, Alex warned me that Apple was dropping their support for the Palm Treo. I couldn’t upgrade to Spotted Lynx, or whatever the latest OS-X is called, until I switched phones. While I had been hoping to hold out for a Verizon iPhone, my patience ended a couple of weeks ago. After a weekend with a Droid, and a brief flirtation with the Palm Pre Plus, I settled on the Blackberry Storm II.

Aside from the built-in contact list and calendar (oh yes, and the phone) I rely on a smart phone for two other things: an ebook reader and a password manager. And I also want to feel some comfort for the phone’s security model. And, oh yes, I need easy access to contacts and calendar on my desktop, presumably through a sync feature.

I didn’t warm to the Droid because it’s too much like having a laptop on your pocket. And since the Pre Plus was a complete rework, I figured it wouldn’t be that similar to the Treo in practice. There was a period of suspense after acquiring the Storm, since I wasn’t sure it would in fact do all I wanted, but things eventually worked out.

I had three problems with the Droid: its excessive computer-ness, its weak security model (a related problem), and synchronization troubles. The computer-ness means that it’s not so much a phone as a computing platform. You yourself have to arrange your ‘desktop’ with the appropriate things, and the learning curve was too steep for someone who didn’t want to spend a whole weekend moving to a new phone.

The Droid security model doesn’t do enough to protect the phone from malware, like viruses, worms, or Trojan horses. Basically, I’d have had to teach myself (and possible configure the Droid) to keep the risk of malware low. I didn’t want to invest that sort of extra time just now.

My son has most of his life posted on the Google web site (contacts, e-mail, and calendar, at least), and all this flowed smoothly onto his own Droid phone. I spent a few hours struggling to get all my stuff replicated onto Google from Apple’s Address Book and an older copy of iCal. No dice. Then I tried a 3rd party product, “Missing Sync for Android,” which briefly looked like a solution. No dice again. Calendar sync turned out to be a “future” feature.

It took about 24 hours to wring all this out. Then I went back to the local phone store and had my old Treo turned back on.

The Palm Pre Plus

The guys at the phone store thoughtfully ordered me a Palm Pre Plus after I expressed my displeasure with the Droid. I like Pre’s the slip-out keyboard, and its self-portrait mirror is worth a chuckle.

But as I looked closer at the Pre, I found only one clear reason to choose it: I would remain faithful to the brand I’d used for over a decade. I picked up a Palm III back when they first came out in the late ’90s, and I never regularly carried a cell phone till after I bought my first Treo (which only ran on T-Mobile).

Brand loyalty isn’t a very practical reason to choose a phone, but it’s all this really was. There was no benefit from my existing Palm software base. As I noted before, the sync software would be completely different, and they had completely rewritten the phone’s operating system. So nothing I had would work, except in an alleged “compatibility mode.” I hate comparability modes.

Such loyalty to Palm would certainly outshine its loyalty to me as a customer. I’ve been putting up with the Treo’s awful Bluetooth software for years. Every time I started my car, I worried about whether it synced correctly with the hands-free gizmo. Sometimes it pretended to sync up when in fact it did not. The Treo even had trouble staying synced with an earbud. Pitiful. And it had been years since the last Treo software update.

Moreover, my wife is stuck using Blackberries. Her clinic signed on with Blackberry and exports her Microsoft Outlook stuff to it (calendar, e-mail, contacts, etc.). She had been looking at the Storm 2, and I have to admit there’s a benefit to both of us having the same phone. I was generally lost when I had to pick up her old ‘berry and try to answer a call.

The Storm 2 is a nice, solid device. The screen surface seems sturdier than anything I’ve used before, including all my Palms. It’s roughly half the thickness of the Treo, and with a much larger screen.

The biggest downside is the ‘soft’ keyboard. It takes up half the screen when it appears, and my fingers only work with it when it’s in landscape mode. There’s some weird “multi-tap” techniques that use fewer, larger keys in portrait mode, but I don’t want to have to train myself on them just now.

On the other hand, the touch screen is solid and reliable. The “landscape mode” soft keyboard hasn’t given me much trouble, though there’s definitely a learning curve. But I’d have had to learn the ‘touch’ of a new physical keyboard in any case.

At first I was really disappointed by the Blackberry calendar, but I’m resigned to it for now. It doesn’t seem to use the available graphics as effectively as the old Treo calendar did. In fact, the graphics are roughly the same as the Treo’s. That’s a real minus for the Storm 2, since it has far more pixels to work with. The Storm 2 calendar doesn’t show quite as much info in Month mode and it’s hard to see the whole schedule in Day or Week mode. Worse, there’s no “Display the Year” mode.

I’m holding out hope that there is an improved add-on calendar app somewhere.

As I noted elsewhere, ebook reading would have been a deal breaker with the Storm 2, had I not found an acceptable solution. As it is, I found Amazon’s Kindle for the Blackberry to be perfectly servicable.

The last piece of the puzzle is the password manager. I’ve used Ilium’s EWallet for several years now, and upgraded it across various Treos. EWallet stores its database in encrypted form using a textual password to protect it. It has a matching desktop version that lets you look at your password list as long as you know the encrypting password for the file.

Ilium offers a Blackberry version which I’m eager to try out. The only problem is that they haven’t yet released their OS-X native version of their desktop software. So I have to run it on a different desktop to start with.

Meanwhile, however, I have to contend with old Palm Treo troubles. The Palm sync software has always been buggy, and they never properly adapted it to work with multi-user operating systems (like, everything on a desktop since the era of Windows 2000). I haven’t been able to sync my EWallet since crashing my Windows XP virtual machine last summer. After that I moved things to Vista and then to Win 7, neither of which were fully tolerated by the Palm desktop sync. I suspect there was a privilege problem – the old software always worked best when running as an Administrator.

But this left me with one set of passwords on my Treo and a different one on my Windows laptop. Since then I’ve brought up another XP virtual machine, and I’ll install all the Palm stuff there, along with a vintage copy of EWallet. Hopefully that will sync up and I’ll get all my passwords into a single list.

I just have to hope that the latest version of EWallet (7.1) will willingly start up with a database from an older version. We’ll see – Ilium seems to be pretty good about such things.

I managed to coax a copy of EWallet onto my Windows 7 laptop and onto the ‘Berry itself.  After a couple of false starts, I got the old Palm and EWallet sync software running on a Windows XP virtual machine I had lying around, and I merged my Palm and desktop wallets – I hadn’t been able to do that since attempting it once or twice on Vista.

Then I moved the wallet file to my Win 7 laptop and laboriously got the sync software working there. The biggest hassle here was that the ‘Berry software limits its sync support to “Yahoo” and Outlook/Exchange. I use neither and don’t want to use them. But if you want any sync at all, you have to sync your calendar, contacts, or “Notes” with either Outlook/Exchange or with Yahoo. I convinced the thing to sync my “Notes” with Yahoo.

At first, EWallet didn’t really work on the Storm. I could open the wallet and scan the card titles, but I couldn’t actually examine any cards. I turned out the “permissions” weren’t correctly set: the three application permissions all require the “allow” setting. I found that out through e-mail with Ilium’s customer service.

Ilium is promising a genuine, sync-capable version of their Mac OS desktop application someday. At present they provide a beta version that allows me to look at my passwords, but not to edit them.

So, for now, I have to sync my passwords with my laptop. Oof.

In case anyone noticed, I’ve adapted a view of a PDP-1’s control panel as wallpaper on my Storm 2. I created two background images: a close-up of blinkenlights from an IBM 360/90, and the PDP-1 image. These images are 360 x 480 pixels, and should work anywhere that needs a low res 3×4 wallpaper, more or less. Here are thumbnails with links to the full sized JPEGs, in case anyone else wants them: 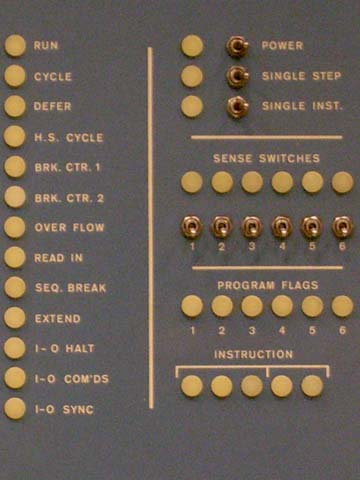