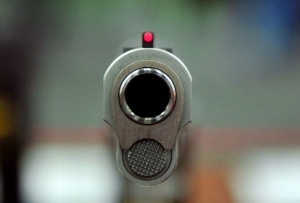 No, actually, I *don’t* think what happened in Orlando will lead to any sort of gun control. In December 2012, 20 children – babies, practically – were murdered in their school rooms, and no meaningful changes to gun laws were made afterwards. If America doesn’t care about the lives of children, do you think it will care about the lives of LGBTQ2IA people?

There is absolutely no legitimate civilian use for an AR-15. And yet the need for a well-regulated militia enshrined in the US Constitution has been perverted by the financial interests represented by the NRA to mean civilians can legally purchase essentially any weapon they want, without so much as proper training in its use.

“Oh, but what if the victims had been armed – they could have fought back.” What, with handguns? It would have made no difference. They might as well have been singing Kumbaya at the terrorist. With assault rifles? In a packed night club? There would have been dozens *more* victims, and within seconds, no one would have had any idea who the attacker was and who the “defenders” were.

“Oh, but laws don’t work. There will always be a way to get your hands on weaponry.” Hey, great argument, Einstein. Following this logic, we should probably make drunk driving legal again. We can’t catch everyone, so let’s make it a free for all.

I could have been one of those murdered early yesterday morning. My friends and loved ones could have been those murdered early yesterday morning. This was an attack on my community. Yesterday afternoon, I volunteered to help park cars at the Big Gay Hudson Valley Pride Picnic. I kept wondering what I’d do if someone drove in and opened fire on us. Would I be vigilant enough to know immediately what was happening? Would I be fast enough to take cover? Would everyone else? Last night I attended a vigil for Orlando in uptown Kingston. There were about fifty of us there – the same number as those murdered. In the silence of our shock and grief, I wrestled with the same questions. What if someone sees in us a perfect target for their rage? These are the people I love. I got to hug them and cry with them last night. And I could lose them in a fucking heartbeat.

But, of course, none of this matters, even a bit. The gun control issue is no longer up for debate. It is already resolved. It was resolved three and a half years ago, when we decided, as a nation, that two dozen elementary school children are an acceptable collateral loss for the indeterminate gains of unfettered access to weaponry. Cisgender heteronormative white men are not the direct targets of attack, and for this reason, any losses are merely collateral and unfortunate at best, because our nation values the lives of no one else. This is the cost of “freedom.” But it is clearly not my freedom, and not the freedom of my community or those I love. It is someone else’s freedom.

Those who make the laws have the luxury of debating these issues in their rarified ivory towers. I do not. We do not. We live with the consequences of their self absorption, their cowardice, their avarice.