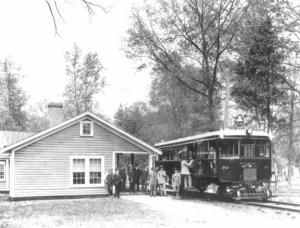 While studying maps of western McLean, Va, where I grew up, I uncovered a mystery.

In 1902, magnate John McLean and politician Stephen Elkins started building a trolley line from Washington, DC, to Great Falls Park (photo at left; see Wikipedia). The tracks show up on maps from 1904 until their removal in the 1930s. The roadbed became Old Dominion Drive, one of the “main streets” of McLean, Va.

Why did it change? Was the first map wrong? That seems most likely to me, but still pretty surprising. I’m asking around for evidence that the tracks might have moved. I doubt there is any, but it’s worth investigating. [See update in a newer post]

The Great Falls trolley loomed large in my youth even though it had been scrapped about 17 years before I was born. We waited for the school bus at an old trolley stop. The Shannon kids waited there, too. Their mom had waited at the same stop as a kid, but she took the trolley to school.

Comforting Assurance: I’m talking about maps, and the on line maps are gigantic, but none of the links below will start a multi-multi-megabyte download. Most links go to Library of Congress pages or other pages that describe things you might download. The map excerpts below are about 1 MB each. A typical Washington area map in its full, scanned, detailed glory, can take up 500 MB of storage.

Here is the “smoking gun” map. It comes from “Baist’s map of the vicinity of Washington D.C.,” dated 1904. The Library of Congress has a copy online, which I used for this research.

Following the tracks eastward towards McLean, the tracks cross Belleview Road close to the Pike intersection. Then the tracks cross Carper’s farm to reach Spring Hill Road, crossing it just north of the Phillips and Johnson homes.

The map doesn’t actually mark it as Spring Hill Road. It may have been called “Great Falls Road” back then. It linked up with today’s Lewinsville Road at Jone’s Corner and followed it past the Lewinsville Church.

The track returns to its expected path when it passes today’s Swink’s Mill Road. That’s the bit of road in the lower right corner with the S.H. Cutts house.

It would be easy to write this off as a simple mapmaking error by the publisher Baist, but it appears elsewhere. I’ve found two other pre-1916 maps showing the same route. One is a “District of Columbia and part of Maryland and Virginia” map from the Woodrow Wilson papers. This is very similar to later Geological Survey maps in the Library collection, though this one is undated and has no named publisher. Another is the “Information Map of Washington,” dated 1912 and published by Norris Peters Co. 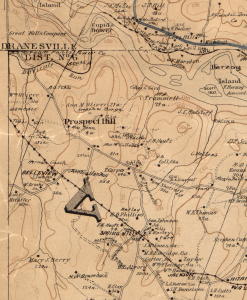 Here is a later version of Baist’s map, published in 1918. This is also available on line from the Library of Congress. The tracks no longer come close to Prospect Hill, which no longer has its Post Office.

The tracks don’t cross Georgetown Pike or Difficult Run on this map. Those crossings happen farther to the west, off the map edge. This is how Old Dominion Drive would appear on this map.

The tracks cross Belleview Road southwest of where they appeared on the 1904 map. The road takes a dogleg turn and the tracks cross just below that turn. This matches the modern road.

The tracks cross Spring Hill Road at what became the Spring Hill village, also matching the modern road. They cross today’s Swink’s Mill Road at the same place as the 1904 map.

Even though the spurious route shows up in multiple maps, I think this is a mapmaking blooper. Local maps show three separate places named “Prospect Hill.”

One of those places is the Prospect Hill trolley stop, shown here. As a child I waited for my school bus just across the street.

The location is not Georgetown Pike, it is Old Dominion Drive. The cross street is Belleview Place, not Belleview Road. The duplicate names may have confused the mapmaker. And a third Prospect Hill is a few miles to the east on Georgetown Pike.

Are we sure the rails didn’t move?

Herbert Harwood’s book “Rails to the Blue Ridge” describes the trolley’s history in detail, but says nothing about rebuilding the Great Falls end of the trolley line around 1912. The business partners described by Harwood weren’t interested in sinking money into capital improvements.

In 1916 the railroad produced plat maps in which the route follows today’s Old Dominion Drive. If the tracks were relaid before that, some evidence would remain. The woods around Great Falls Park should still contain parts of the old roadbed, bits of rail, or other railroad construction materials. It has been less than 100 years, and abandoned items will be rusty but recognizable.

If the rails were moved, there should be abandoned bridge abutments near the bridge where Georgetown Pike crosses Difficult Run. The abutments should line up with remains of a rail roadbed. I haven’t been around there in decades, but I would have noticed details like that.

The Library also has a 1912 Post Office map of rural delivery routes in Fairfax County. Here, the trolley tracks stop abruptly just past old Chain Bridge Road and the original McLean village. I’m not sure how to interpret that.

3 thoughts on “A Trolley Line Mystery”