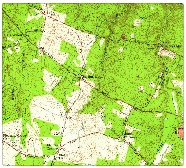 My neighborhood went through dramatic changes while I grew up. I was 10 miles from Washington, DC. Changes are even more dramatic since I left, about 40 years ago.

I went to the US Geological Survey and collected every map I could find of my neighborhood from 1890 through 1994. I lined them all up and made it into a video. It could be better, but it’s interesting.

Here’s a PDF of the original map fragments in the animation.

I used GIMP and its GIF animation to do this. It could be better, but I decided to share my first try:

Three observations about this process:

Anyone who has an idea of where I can find more maps, feel free to contact me.

6 thoughts on “100 years of my childhood neighborhood”